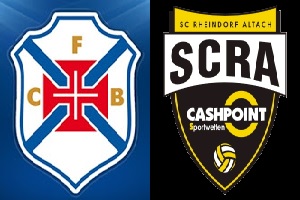 The second leg between Belenenses from Portugal and Altach from Austria.
The first game was won by Belenenses with 1-0, but they proved that they are far better team than their opponent.
Altach is the weakest team in the Austrian Bundesliga. They have only one win and five losses after six game played.
Belenenses is much more experienced team and with the support of their fans I am sure they will win this game.
This match will be a proper training for the Europa League group stage.
The quoted odds are from bet365. You can check from: HERE
More free tips and useful betting tools at www.globet365.com