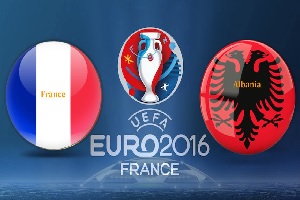 France will play against Albania in the second round in Group A of EURO 2016.
In their first game France was able to score twice against Romania, even though Romanian defense played very well in that game. Pogba and Griezman disappointed in the first one, but I think they will play better and create more opportunities in this match.
Albania lost against Switzerland with 0-1. They have the poorest offense coming to this game with 7 goals from 8 games. Their defense was not so good as it was in the qualifications and were lucky to loose by one goal difference. Also their captain Cana received red card and will not participate in this match.
France will make a statement here and win this game comfortably.
Good Luck!
The quoted odds are from Betfair Exchange. You can check from: HERE
More free tips and useful betting tools at www.globet365.com