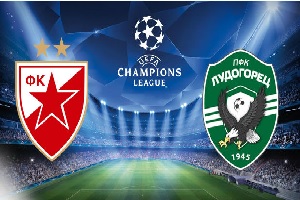 Crvena Zvezda will play against Ludogorets in the Champions league on Tuesday.
This is the second leg of the Qualifications stage and it will determine the team, which will qualify to the next round.
The first match ended 2:2 and the rematch promises to be as exciting as the first game.
The visitors will have to attack from the start and score as many goals as they can, because we saw how easily they conceded two goals. Ludogorets have better squad and are fully capable to score goals.
On the other hand Crvena Zvezda surprised with their transformation in the second half of the first leg. I am sure they will be able to score at least once in front of their fans.
It is difficult to predict, which is the team that will continue to the next stage, but I am sure that we will see at least 3 goals in the match.
Good Luck!
The quoted odds are from Betfair Exchange. You can check from: HERE
More free tips and useful betting tools at www.globet365.com