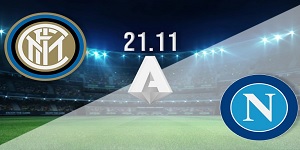 Inter face Napoli in a match of the 13th round in Serie A. Before the break for national teams, the Nerazzurri ended in a draw 1:1 with their great rival Milan and remained seven points from the top. The only goal for Inter was scored by the former Milan player Hakan Calhanoglu, after a penalty. In general, the draw was a natural result, although Inter had more chances.

Napoli took the wrong step, ending in a 1:1 draw with Verona and missed a golden chance to break away at the top with a two-point lead over Milan. Both teams scored their only goal in the first half. After the break, the “Sky Blues” performed very poorly and did not even strike from within the penalty area of ​​Verona. In the end, the Mastiffs deserved a draw after doing their best to limit the actions of Napoli’s attackers.

The bookmakers give Inter a certain advantage over Napoli and I tend to agree with them. Despite the big changes compared to last season, in my eyes the champions are still the strongest team in Serie A and should not be written off lightly. Inter may have failed against Lazio in the 3:1 loss, but in the draws with Juventus, Milan and Atalanta was better and deserved to take a full set of points. If that had happened, the current ranking would have looked different.

Napoli is performing very convincingly, but it has yet to compete against the teams occupying a position around the top in Serie A. The success of the “Sky Blues” is mainly due to good performance in defense, but against a strong opponent like Inter will be more hard. I am not convinced that Napoli’s defense will withstand possible pressure from the hosts, who have scored at least two goals in 9 of a total of 12 games and have scored in every round so far. The psychological advantage is also on the side of Inter, after last year they beat Napoli twice at Giuseppe Meazza.