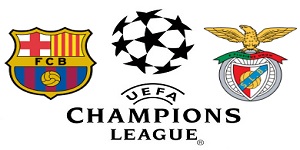 The first quarterfinalist of Group E of the Champions League is clear in the face of Bayern Munich. There are two more rounds left until the end of the group stage, and the big question is whether Barcelona will be able to cope with the battle for second place or will drop out ingloriously. We will receive this answer on Tuesday, when Xavi will make his debut as a head coach in the tournament of the rich.

On September 29, Benfica not only recorded one of its biggest successes in recent years, but also completely beat Barcelona. In the third minute, the Portuguese took the lead in the result, but that did not stop them from being the more dangerous team on the field. This led to the classic 3-0 in their favor. Thus, the Eagles recorded their first success after three defeats and three draws with this opponent.

Barcelona has a two-point lead in the battle for second place, but in the last round will visit the Allianz Arena. The six points were scored by Blaugranas in two unconvincing 1-0 victories over Dynamo Kyiv. The first match with the German champion was lost severely with 0: 3, and Depay and company did not even make an accurate shot.

At the same time, Benfica played with Bayern Munich and lost both matches. The Eagles lost 0: 4 at home, although the result of the break was equal. In Germany, the goal show was even more expressive – 5: 2 for the Germans. In these two matches, the Portuguese collected all nine goals in their own goal, but for the first time they defeated Noer this season in the tournament. Benfica’s big mistake so far has been a zero draw with Dynamo Kyiv in Ukraine.

Xavi started with a 1-0 victory in the derby of Catalonia over Espanyol. However, his team’s game was not convincing at all, but the impression is that the team is stable in defense. Benfica, on the other hand, went ahead for the Portuguese Cup and also entered the upcoming match with a victory and a good mood.

If there is one place where Barcelona is relatively stable, it is the Camp Nou. The team is the best host in La Liga with five successes in eight visits. In turn, Benfica has shown slight fluctuations recently as a guest with only one success in the regular time of the last five visits. I expect a cautious game from the guests, who know very well that points in Spain remain a serious chance to move forward in the tournament. Barcelona looks stable in defense, and it will be extremely difficult for Xavi to return the attacking and effective image of the team.