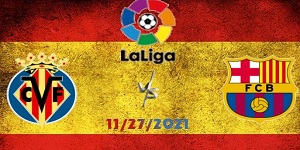 If there are teams in La Liga that perform below expectations, it is Villarreal and Barcelona. There is no good season for the two teams, which are distracted by their participation in the Champions League. The Yellow Submarine is only twelfth, while the Blaugranas are six points behind interim leader Real Madrid.

Villarreal is one of the teams that lose the least in La Liga, but at the same time one of the ones with the fewest wins. The reason for this is the seven draws in the first thirteen rounds. Villarreal have won just one of the previous six games of the Spanish elite, and in the last one they finished 1: 1 as a guest of Celta Vigo.

The beginning of a new era in Barcelona is a fact. Xavi Hernandez started with a victory at the head of the favorite club in the derby with Espanyol. It was not easy for his team to get to the three points, as it happened thanks to a goal from a penalty by Memphis Depay. This was only the fifth success for the Catalan giants since the beginning of the campaign.

During the week, both teams took part in the fifth round of the group stage of the Champions League. Villarreal lost 0: 2 to Manchester United, but remains in second place and everything is in their hands. The same goes for Barcelona, ​​who finished 0-0 at home with Benfica and need a point at the Allianz Arena to move forward.

The attack of the “Yellow Submarine” is not doing well in the Spanish elite, and that of Barcelona is good only at the “Camp Nou”. The Catalans are still unsuccessful as a guest, and this sounds logical against the background of only four hits outside. Matches with less than 2.5 goals predominate in the assets of both teams and I do not expect anything different today in a tactical clash that can end even without goals.