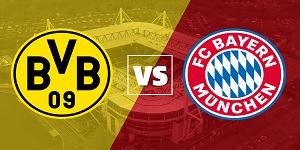 European football offers a lot of interesting clashes today and the German Bundesliga is no exception. In the fourteenth round at “Signal Iduna Park” forces will measure the second and first in the ranking – Borussia Dortmund and Bayern Munich. The match is very important for the hosts, as this is the biggest test for them regarding the question of whether they can compete with the champions in the title fight.

So far, the “Yellow-Blacks” are doing well with ten wins and only nine missed points in the first thirteen rounds. The good news is that a week ago Holland returned from injury and even scored against Wolfsburg, just nine minutes after appearing in the game. Borussia is also the best home team with an impeccable record. All three losses were away from home.

We can definitely say that Bayern Munich is not in the best possible form in the  Bundesliga. A week ago, Arminia Bielefeld was beaten with only one goal difference, and during the previous visit a surprising we saw a surprising defeat with 1:2 from Augsburg. It was the second of the season, with the champions also having ten wins. The Red and Whites are not the best guest in the division, and so far, apart from the VVK Arena, they have made a mistake in Mönchengladbach.

Undoubtedly, this rivalry is the most interesting in Germany since the beginning of the century. However, Bayern Munich has a serious advantage and loses rarely, currently in a series of six consecutive victories over this opponent. It seems like the best game for the hegemon to be motivated, and perhaps this is what leads to the positive results in the rivalry.

For the past year, the two teams have met four times, exchanging a total of 20 goals. Today, we expect such a development again, and it is not just us. These are the two most successful teams so far in the division with a total of 75 goals scored. At the same time, Borussia conceded an average of 1.5 goals per game, and Bayern has zero clean sheets as a guest. We have seen over 3.5 goals in more than half of the matches between the two teams so far and why this should not happen when they face each other.