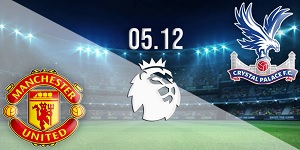 Manchester United face Crystal Palace in the 15th round of the Premier League. During the week, the Red Devils beat Arsenal 3:2, ending a negative streak of four unsuccessful matches at Old Trafford in the league. The match was with good chances for both teams, but the victory for United was still deserved. Arsenal’s goals came after ridiculous ricochet situations, while the Red Devils made their goals after excellent attacks and combinations.

Crystal Palace lost their visit against Leeds with 1:0. The only goal came in the 93rd minute after a well-executed penalty by Rafinha. Compared to what both teams showed, Crystal Palace deserved more the three points. However, as is often the case so far, the Eagles outperform their opponents, but they lack enough experience, confidence and class to turn their superiority on the field into three points.

Good results against Chelsea and Arsenal should restore the mood in the team of Manchester United. I expect that the upward trend in the performance of the team will continue and on Sunday the hosts will claim the three points. Against Chelsea, United was expected to be more passive in their performance, but against Arsenal they made several successful attacks and put the defense of the Gunners under pressure. The Red Devils’ approach to Crystal Palace should be similar and very likely to bring them the same result.

Patrick Vieira’s players lost to Chelsea and Liverpool 3:0 after being totally outplayed. The surprising 2:0 victory against Manchester City was rather an isolated case and I am not convinced that the strength of the guests will be enough to fight the inspired Manchester United. Crystal Palace won two visits to Old Trafford when Ole Gunnar Solskjaer was manager of the Red Devils. With Ralph Rangnick as a manager, the team will play a very different style of football and will be a much more unpleasant opponent for any team in the Premier League.