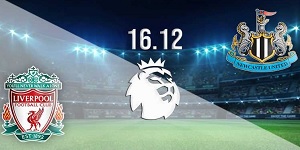 Liverpool meet Newcastle in a match of the 17th round of the Premier League. Last weekend, The Reds were forced to fight for the three points in the second consecutive game of the championship, winning with 1:0 against Aston Villa. Earlier, Liverpool won with the same result against Wolverhampton. Divok Origi then scored the goal in the last minute of added time, against the “Villans” the goal was scored by Mohamed Salah after a penalty in the middle of the second half.
Newcastle played poorly in their visit to Leicester and lost with 4:0. Given that the Foxes had not kept a clean sheet in all the tournaments since September 22, the lack of goals for Newcastle is definitely worrying. Just over two weeks ago, Newcastle were also defeated as a guest by Arsenal 2:0, without creating a real clear goal situation, which would threaten the defense of the Gunners.
Not surprisingly, even before the assignment of Eddie Howie, Newcastle also had only defeats against teams in the top half of the standings. In most of them, however, the Magpies at least tried to be competitive enough. Newcastle made it too easy to fall behind in the result against Leicester and Arsenal, and after receiving a goal, failed to take the initiative even for a short period of time. In this situation, it is difficult to expect any other result on Thursday than a definite success for the hosts.
Liverpool won their last two games with only 1:0, but that does not mean they do not dominate their rivals. Merseyside maintain a consistently high level in the lead, creating a very dangerous situation and the matches with Aston Villa and Wolverhampton were no exception. Almost the same goes for Liverpool’s defense. So far, the only team that lost in the Premier League, but scored a goal, was Everton (1:4). The other 10 victories of Liverpool in the championship are without receiving a goal. What we have seen in the game between Newcastle and Leicester, it will be a big surprise if the trend in Liverpool’s performance does not continue.