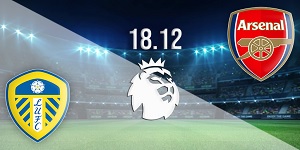 Leeds meet Arsenal in a match of the 18th round of the Premier League. During the week, the “Whites” suffered their biggest defeat this season, losing as a guest to Manchester City with 7:0. Leeds’ performance was embarrassing, but somewhat expected compared to what has been shown recently with the large number of injured players. In the last seven rounds, Leeds have won only once with 1:0 as a host of Crystal Palace.

Arsenal achieved the second consecutive win in the Premier League, triumphing 2:0 against West Ham. The Gunners definitely outplayed their opponent and could have won even more convincingly. Arsenal’s dominance was clear in the first half, but the first goal was scored in the beginning of the second half. It would not be an exaggeration to even celebrate the victory over West Ham as one of the best matches for the players of Mikel Arteta this season.

In this situation, it would be most logical to expect that Arsenal will have no problems against the hesitant Leeds and will win on Saturday. However, the poor form of the Gunners as a guest this season leads to some doubts about such an outcome. Away from the Emirates, Arsenal defeated only Leicester (2:0) and Burnley (1:0). Just a few days ago, Arsenal made a turnaround in their visit to Everton (loss 2:1), which is in very bad shape and even according to many is currently the weakest team in the Premier League.

The main problem for Arsenal in his away games is that it does not play so well in their attacks. At the Emirates, Mikel Arteta’s players are far more confident and outperform their rivals. This does not happen as a guest and Arsenal does not make many shots on target, which explains the results.

Leeds have had major problems with injured players throughout the season, but they have deepened recently. Without Patrick Bamford and Kalvin Phillips, the Whites are a different team. Compared to last season, Leeds scored much fewer goals anyway. I expect that on Saturday both teams will play more defensively and there will be under 2.5 goals. Last season, the two teams took a point each at Ellen Rhodes after a draw.