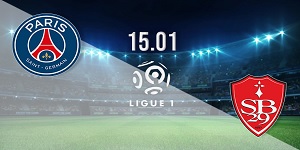 Yesterday Nice won their home game against Nantes and the difference to the leader PSG was reduced to eight points. This puts Pochettino under slight pressure before hosting one of the best guests in the division. The bad news for the home team is the lack of Neyamr and Messi, and in addition there are missing players like Di Maria, Draxler, Donaruma, Danilo, Kurzava, Hakimi and others.

The selection of PSG is solid, and many absentees are common for Pochettino in the matches of the season. Lately, however, this has proved to be a problem, as in the last five rounds of Ligue 1 they have only one victor over Monaco. Last month, the team failed in its attempt to beat Nice, Lance, Lorient and, a week ago, Lyon. In the last five matches the defense of Paris Saint-Germain did well, but scored only five goals, which is not typical for the class of the team.

Brest arrives in Paris after a heavy defeat with 0:3 by Nice in the previous round. This was the second significant loss for the Reds at home and comes after a solid series of good results. Within two months, Brest was undefeated against teams such as Lille, Monaco and Marseille, and even found time to record six consecutive victories. So the team quickly got out of the relegation zone, but still can not rest assured about its survival.

In just two games for PSG during the season, six goals were scored, and one of them was a 4:2 victory over today’s opponent in August. Then Messi and Neymar were not available again, and the goals were scored from four different players. Today, however, Brest looks like a team that could confuse its opponent’s plans. PSG are not very convincing in their performances so far, often finding it difficult to find their way to the opponent’s goal. In just six of the Parisians’ matches so far, more than 3.5 goals have been scored and I don’t think that can happen today.