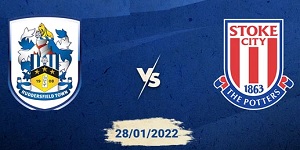 Huddersfield is one of the teams dreaming of returning to the English Premier League. Today, they welcome Stoke City, who until recently had the same ambitions, but fell into a series of poor results that dropped him to eleventh place. However, the Potters today have the opportunity to get closer to three points in the Top 6, which is closed by their current opponent.

Huddersfield have forgotten about the losses lately, as such has been missing in the Championship for eight games. The draws, which do not bring many points, turn out to be a slight problem, but four successes were recorded in this series. One of them was over Nottingham, who also has ambitions for the playoffs. Last week, the Terriers beat Reding Salvation 4-3 away.

Stoke City’s poor results are four wins and a single victory over Hull City in the last five rounds. We can go back a bit to see that more than half of the team’s losses (6) were in the previous third of the matches (9). The last match for Stoke was on Tuesday with a 0: 1 loss as a guest of Coventry, and the team did not even make an accurate shot in the match.

The first meeting between the two teams took place entirely under the dominance of Huddersfield, who came out ahead in the result in 47 minutes. Only 16 minutes later, however, Stoke was already leading, and the result 2: 1 remained until the last referee signal. Thus, the “Terriers” remained unsuccessful in four consecutive games of the rivalry, but today they are definitely the favorite for the ultimate success.

Huddersfield collected slightly more points as a host than as a guest. In seven of thirteen home games, the team won and suffered only three losses. At the same time, Stoke City are not a bad guest with five wins, but it would have been better if the six defeats were less. I take into account the form of both teams and I do not think that the guests have the strength for complete success today. Huddersfield are hesitant in defense and may concede a goal, but I expect this to be the maximum for the guests to concede in the match.