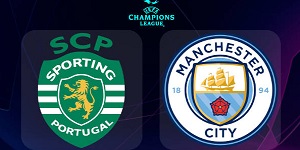 The big favorite of the bookmakers for triumph in the Champions League this season is Manchester City. This is largely due to a relatively light opponent in the round of 16, although I do not consider him as such, as we are talking about the champion of Portugal Sporting Lisbon. However, if we look at the odds, the Blues should decide everything on their visit on Wednesday.

Sporting was not convincing at the beginning of the group stage, starting 1: 5 at home against Ajax, and two weeks later followed by a loss to Borussia Dortmund. However, the turnaround was a fact with three consecutive victories – two over Besiktas and an extremely valuable one over the Germans with 3:1 at home. This success was key, as the points of both teams were equal. The participation of the “Lions” in Group C was closed with another heavy defeat by the great from Amsterdam – 2:4.

Manchester City was confident in its first position in Group A after playing the first five games, from which it managed to collect an asset of 12 points. Of course, Bruges was defeated twice with ease, and rivals RB Leipzig and PSG were also beaten at home. As a guest in the matches of the group Manchester City was again the more insistent team, but this did not lead to anything good in Paris and Leipzig, as these two visits were lost.

Sporting has a day off for the upcoming match, but on Friday he had to throw all his strength in the derby with Porto. The Lions twice took the lead, but failed to win, so the Dragons’ six-point lead was maintained. Manchester City is confidently heading for a new Premier League title. Norwich’s visit was won 4-0, with Guardiola making a mistake in just five rounds since the start of the season and the lead over second-placed Liverpool remaining nine points.

Sporting is in the round of 16 for the first time since the 2008/09 season, when it lost 1:12 to Bayern Munich. In all likelihood, the Lions will say goodbye to the race again after March 9, but I think they have something to show, especially on their own turf. Manchester City is the team that has a lot to lose, and if successful today will be the first team in history with five consecutive victories as a guest in the Champions League. We saw 28 goals in the six matches of the “Citizens” in the group stage, as they failed to keep a dry net and conceded ten goals.