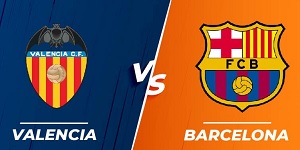 The derby of the 25th round of La Liga pits Valencia and Barcelona against Mestaya. The hosts are still in bad shape, which brings them to twelfth place and now the road to European tournaments seems too complicated. The guests in turn returned to the Top 4 a week ago, and participation in the Champions League would be considered a success given the poor start to the season.

Valencia has not completely forgotten about the victories, but at least in La Liga it is. For six consecutive rounds, the Bats have been unsuccessful, with four of those matches lost. Last week the team lost 1: 2 as a guest of Alaves. The big goal until the end of the season is a trophy from the King’s Cup, where the team is in the semifinals against Athletic Bilbao. The first match ended 1: 1, and the rematch of “Mestaya” is in early March.

Barcelona is not doing well, but much better than the autumn. Almost three months have passed since the last loss in La Liga. A week ago, the Blaugranas were seconds away from losing in the derby with Espanyol, but de Jong equalized for 2: 2 deep in added time. On Thursday we saw for the first time the new trio of Xavi in ​​the attack from the first minute. Traore, Obameyang and Ferran started against Napoli. Barça was the more attacking team, but the first clash of the Europa League ended 1: 1. The rematch in Italy is next week.

One of the best victories for Barcelona this season was in the first meeting with this opponent in October – 3: 1. The Blaugranas remain in good shape on their own ground, but the serious problem is that success was recorded in only 25% of visits, although there were only two losses. Valencia also feels far better as a host and so far lost only to Real Madrid and Espanyol.

I easily chose a prediction for this derby and I hope it will be a win-win. I expect hits that are not usually a mirage in the matches between the two teams. In just one of the last six games of the rivalry in La Liga, the line of over 2.5 goals was not covered. Valencia has no problem scoring goals this season, and the reason for the poor results is the actions in defense. Xavi is betting on extremely attacking football and at times it seems too easy to overcome the defense of his team.