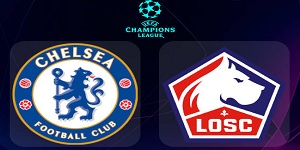 Chelsea face Lille in the 1/8 finals of the Champions League. The current winners of the trophy did not win their group, but the draw determined to face perhaps the weakest leader in the group stage. Chelsea failed in their last match in December, finishing 3: 3 with Zenit after a late goal in added time of the Russian champion. Lille, on the other hand, managed to compete with Salzburg, Sevilla and Wolfsburg with a very pragmatic approach, relying mainly on good defensive action and quick counterattacks.

At the moment, both teams are not in very good shape, but it is expected that the Londoners will have an advantage. The self-confidence gained after last year’s triumph in the tournament, as well as a few weeks ago at the Club World Cup, tipped the scales in Chelsea’s favor. Over the weekend, the Blues worked hard to win their visit to Crystal Palace with a minimum of 1: 0. The game in front of Chelsea did not work at all and the only goal in the match fell after a cross intercepted by Hakim Zies on the far post.

Although he outscored his opponent for most of the match, Lille did not beat Metz and the two teams shared a point after a draw. Metz may be in the penultimate place in the standings in League 1, but recently he has progressed and is not to be underestimated. However, it is certainly expected that the French champion will win three points against such opponents and even a draw can be considered a failure for the Mastiffs. Lille has not been effective in attack lately and this is about to cost him an attack on the positions eligible for Euro participation next season.

In his last four Ligue 1 games, Lille have scored just two goals. This happened with the 5: 1 loss to PSG and the minimal success with 1: 0 against Lorient. Judging by the performance of the Mastiffs in the fall, their approach to Stamford Bridge should be almost entirely defensive. Perhaps this is the only correct move by Joslen Gurvenek’s players at the moment, given the problems in creating situations.

Chelsea are struggling against tight defenses and this is currently the most effective way to outsmart them. Without active action on the flanks by Reese James and Ben Chillwell, the Londoners are quite predictable in their actions in attack. Opposing defenders isolate Chelsea striker Romelu Lukaku from the game and it becomes quite difficult for the other attacking players to find their way to the opponent’s goal.

However, entirely because of their home advantage, the experience and confidence gained in recent months, as well as the lack of a large number of dry nets for Lille this season, I expect Chelsea to win. I am far from thinking that the Blues are able to repeat the success of PSG against Lille with 5: 1 a few weeks ago, but a minimal success with 1: 0 or 2: 0 seems like a completely logical outcome of Tuesday’s match. As a host, Chelsea often takes many corners and it is from there that he can punish his opponent. Lille have conceded 7 goals after corners this season, which gives him the last position in League 1 on this indicator.