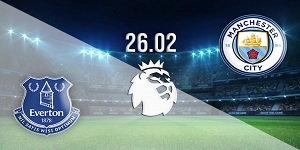 Everton face Manchester City in the 27th round of the Premier League. My expectations that the Caramels would lose their visit to Southampton 2-0 last weekend came true, and the difference between the two teams in digital terms could be even more serious. As in the visit to Newcastle, Frank Lampard’s players were too easy to overcome and the positions in front of Jordan Pickford’s door were one after another.

Manchester City suffered a surprising loss at home to Tottenham with 2: 3, which ended his series of 15 games without defeat in the Premier League. The Citizens fell into the trap of Antonio Conte and were eventually deceived by the Spurs. The loss allowed Liverpool to close the gap with the champions by only three points, which somewhat tied the intrigue in the title fight. However, the Citizens’ program is easier for me and at least for now the current champions still seem to be the favorites for the gold medals.

Traditionally, Everton are not among the teams that earn points against Manchester City. The Citizens have beaten the Caramels in their previous five visits to Goodison Park, scoring three goals in three. The current situation is interesting, because with Frank Lampard at the helm Everton was very convincing in both households. The Caramels beat Brentford 4-1 in the FA Cup and then triumphed 3-0 against Leeds in a Premier League match.

Of course, the challenge on Saturday night will be far more serious. Manchester City are among the best teams on the continent and I am far from thinking that the loss to Tottenham was able to shake the confidence of the players of Pep Guardiola. On the contrary, my expectations are that the Citizens will use Saturday’s match to return tensions to Liverpool by winning convincingly. In each visit against bottom teams, Man City scored three or more goals and just two weeks ago took Norwich 4-0.