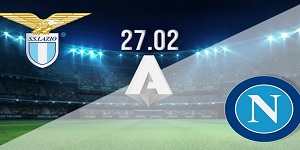 An interesting Serie A match in Rome is coming up on Sunday. In the capital of Italy, the sixth in the ranking Lazio will meet the contender for the title Napoli. At the end of November, there was no dispute in Naples. Up to 29 minutes the hosts took the lead with 3: 0, and the final result was 4: 0. Imobile and company reached barely accurate shots, which were not enough even for an honorable goal.

On Thursday, both teams defended their honor in the Europa League, but failed to cope and together left the tournament in the 1/16 finals. Lazio finished 2-2 with Porto at home and dropped out after making a complete turnaround and losing 1-2 to Portugal. Napoli lost 2: 4 to Barcelona at home and failed to take advantage of their home game after a 1-1 draw in Spain.

Lazio is in good shape in the championship and has not lost since January 9. In the following five matches, the Eagles recorded three victories and two draws. We must take into account the excellent defense for the team, as in this series was allowed only one goal in a 1: 1 draw with Udinese a week ago. Salernitana, Fiorentina and Bologna were defeated 3-0, and the big match with Atalanta ended 0-0.

Napoli failed to win in the previous two rounds and did not take advantage of the mistakes of Inter and Milan in the title fight. It was against the Nerazzurri that it was one of the two matches that ended 1: 1 in Naples. Earlier this week, Victor Oshimen saved the point for his team with an equalizer in the 87th minute as a guest of Cagliari. Napoli also did not taste the loss of Serie A soon, as it last happened on December 22.

The match is difficult to predict and I think it differs from the classic markets. Both teams are mostly disciplined on the field with 2.69 and 1.73 yellow cards per match, respectively, and their matches usually end with less than five cards. The referee of the match will be Marco Di Bello, who in 41 Serie A matches showed 41 yellow and 1 red cards. In four of these meetings he showed more than four cards, and only in the match between Venice and Salernitana was the number of five official warnings transferred.