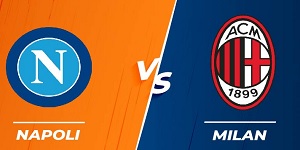 At the top of Serie A is quite interesting, as Inter took it after a clear success with 5: 0 over Salernitana on Friday. Today, Napoli and Milan are in a direct clash, and the draw will equalize the three teams with 58 points at the top. This is exactly what Juventus is hoping for, which is already in the Top 4 and seems to have the strength to fight for the title.

There is a lot in common between the rivals in today’s derby at the top. They have 17 wins, 6 draws and 4 losses, and have scored almost the same number of goals. However, the Sky Blues are doing far better in defense, the best of all teams in Serie A. They conceded 10 goals less than 29 in the door of the “Rossoneri”.

In the new year, Napoli is still undefeated in Serie A, the period includes eight matches. The points were shared with Inter and Juventus, and another derby with Lazio was won 2: 1 a week ago in Rome. The last loss for the “Sky Blues” in the championship was inflicted by Spezia at home, and this is exactly what happened to Milan at home against this opponent. For five consecutive games, the Rossoneri are undefeated, also ending in a draw with Juventus, but beating Inter. In the previous two rounds, the Milan giants disappointed in a draw with Salernitana and Udinese.

Napoli can now focus entirely on appearances in the league, as he was eliminated from the Europa League. The team drew the toughest possible draw and had the misfortune to play Barcelona at a time when the Spanish giants are waking up. Milan dropped out of Europe in December, but are fighting for their place in the King’s Cup final. During the week, the semifinal with Inter ended without goals, and the rematch is in mid-April.

In the autumn Napoli won 1-0 in Milan, and few goals are common for matches of this rivalry. Four of the six matches between the two teams in Serie A ended with less than 2.5 goals, and I expect this to happen today. The matches in Naples during the season usually do not offer many goals, but in only three visits to Milan the bet for less than 2.5 goals was winning. Despite this discrepancy, today I expect tactical outplay and moderate defensive action to prevail. A tie can be suicidal for both teams, but a loss can be fatal to their championship ambitions.