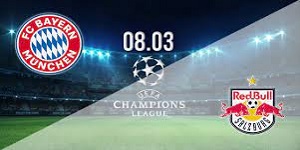 Bayern Munich have always been among the favorites for the Champions League trophy and as such were expected to easily pass through to the round of 16. The German draw champion was very lucky, but Red Bull Salzburg showed character in the first match and may regret not taking the lead before the rematch in Munich.

In mid-February, Junior Adamu put the Austrian champions ahead with a goal in 21 minutes, just 9 minutes after replacing the injured striker Okafor. This goal fit perfectly into the plan of the hosts, who were extremely dangerous on the counterattack and more than once could double their lead. This did not happen, the massive pressure of Bayern Munich eventually had an effect with an equalizer by Kingsley Coman in the 90th minute.

The Nagelsman-led Bavarian colossus has certainly not performed so convincingly, winning just two of its previous five official matches. In three of them, the team scored only one goal, which was not enough to succeed on Saturday. The champions led Bayer Leverkusen at home, but Mueller’s own goal in 36 minutes shaped the final result.

Red Bull Salzburg has achieved another success in the Austrian Bundesliga and already has an 18-point lead over the second Sturm Graz. The team is also pursuing a double in the country, and is already in the semifinals of the Austrian Cup. The big challenge remains the Champions League, as overcoming the group stage is a significant success, as well as the opposition of one of the great grandees in Europe.

I don’t think I have much to think about and think about my prediction of today’s clash. Despite the hesitant performances lately, Bayern Munich is a huge favorite and although difficult, I expect to continue to the next phase. Red Bull Salzburg is a tough opponent, who in the first match demonstrated that he can be very dangerous on the counterattack, and there will definitely be opportunities for such. I bet on a tighter clash than expected, hits in both doors and success for the German champion.