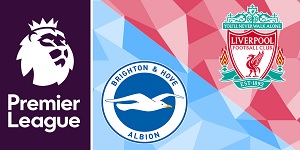 Brighton welcomes Liverpool in the 29th round of the Premier League. Last weekend, the Seagulls suffered their fourth straight loss, losing 2-1 away to Newcastle. The Magpies took the lead with two early goals in the 15th minute and logically focused their efforts mostly on defending their lead. Since the beginning of 2022, Brighton has achieved only two victories in the championship and naturally slipped to 13th place in the standings.

Liverpool does not give even a drop of peace to Manchester City in the battle for first place. Last weekend, the Merseysiders beat West Ham 1-0, keeping the distance between the two teams by just six points. However, Liverpool has played less than the champions, has a better goal difference and has yet to visit the Etihad. In the best of circumstances, it is quite possible that the Reds will be in first place in the standings.

During the week, Liverpool lost 1-0 to Inter in a rematch of the 1/8 finals of the Champions League. However, with a total score of 2: 1, the Merseysiders continue in the next phase of the tournament. In both games, Liverpool was the better team and only bad luck prevented him from winning the rematch. In the Premier League, the Merseysiders are very convincing and are in a series of seven consecutive victories. The last time Liverpool did not take three points in a match of the English Championship on January 2, when they ended in a draw 2: 2 with Chelsea.

Recently, Brighton has been a tough opponent for the Merseysiders and has not lost any of the previous three clashes between the two teams. As hosts, the Seagulls have always resisted and very rarely make shocking losses like the one against Burnley 3-0. In the current form of both teams, however, Liverpool enters as the favorite, although as seen against Inter, sometimes there are problems with the completion of their attacks.

I expect that Brighton will be very defensive in the match and will try to minimize the situation for the guests. Only an early goal in the match would make the hosts more offensive. All the prerequisites for not getting a successful match are there and I recommend betting on an Asian goal line of 3 goals. Since the beginning of the season, the home of Brighton have scored more than 3.5 goals in the loss against Manchester City (4:1).