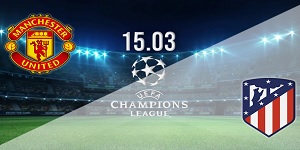 There were three pairs from the round of 16 of the Champions League, which attracted serious attention and were worthy of at least a semifinal. It is already clear that Real Madrid and Liverpool eliminated PSG and Inter, respectively, and today we will follow the outcome and the third match of this group, which I described. At Old Trafford, Manchester United welcomes Atletico Madrid with hopes of performing far better than what was demonstrated at Wanda Metropolitano in February.

Atletico Madrid deserved to have at least a goal lead before the rematch, although the goal of Joao Felix in the seventh minute turned out to be the only accurate shot in favor of the “Mattresses”. It seemed that the Spanish club had control over the match, although they controlled the ball in only 39% of the time. In the end, Manchester United got lucky and got to a valuable goal for 1: 1 in 80 minutes, which was the work of the reserve Elanga.

The two teams from the first match played each other in three matches. The Red Devils did not score in a draw with Watford, and then were tragic in the Manchester derby lost 1: 4. This Saturday, however, Cristiano Ronaldo was above all at Old Trafford in a 3-2 victory over Tottenham. The Mattresses, in turn, did far better. They scored seven goals, which were enough to beat Celta, Betis and Cadiz.

In the first match I managed to give a winning forecast on the markets “Goal-Goal” and “Exact Result”, and today I will copy my choice. Hitting both gates seems to me to be the most reasonable bet for the upcoming match, and overtime and possible penalties seem very likely against the background of the abolition of the goal rule on foreign soil.

This season, both teams are hesitant enough on all fronts, and at times the defensive performances are touching, especially for the level built by Atletico Madrid under the leadership of Diego Simeone. For a purely statistical base I will take the last ten matches of both teams from all tournaments. In seven of those of Manchester United, the goal bet in both gates was winning, and this was the case in six of Atletico’s matches.