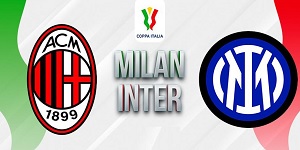 For the fourth and last time this season we will watch the derby of the city of Milan. Inter and AC Milan face each other in the semi-final rematch for the Italian Cup. Tomorrow, the winner of this pair will know his opponent in the final, and he will most likely be named Juventus, but let’s not write off the insidious tournament opponent Fiorentina.

On March 1, Milan hosted the first semifinal, and the match ended without a goal. The Rossoneri were the slightly more active of the two teams on the field in an otherwise equal match. Thus, Inter failed to win even once in the three matches of the rivalry this season. The first one in Serie A ended with a score of 1: 1, and Milan won 2: 1 their visit.

The two teams are also in dispute over the Scudetto. At the moment, Milan is at the top with two points ahead, but Inter has a passive match. On Friday, the two greats from Milan met opponents who had to be defeated and this was done. The Rossoneri won 2-0 over Genoa and the Nerazzurri beat Spezia 3-1 away.

For a long time both teams continued without a loss in all tournaments. Inter’s Serie is nine games, but here we see a few unforeseen draws that do not help much in the battle for the Serie A title. The same goes for Milan, who shared the points with Bologna and Turin in April and failed to even sign . However, the team remains undefeated since January 17 or exactly thirteen matches.

There are many commonalities between the two teams before the first referee signal on Tuesday. I have already mentioned some of them, and the key to my forecast today is the excellent performances of both teams in defense. Dry nets in recent months are normal for both Inter and AC Milan. However, we see a problem in attack, as both teams rarely score more than a goal, and there are many matches in which they failed to sign. I expect a strong tactical clash, which will not offer more than 2.5 goals.