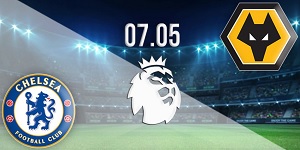 Chelsea meet Wolverhampton in the 36th round of the Premier League. Last week, the Londoners presented another disappointment to their supporters, losing 1-0 against Everton. In reality, the Caramels’ goal was scored after another mistake by one of Chelsea’s defenders, in this case Cesar Azpilicueta, but this does not mean that the Blues deserved to take even a point from the match. Everton showed much more passion and desire to please their fans, compared to the players of Thomas Tuchel.

Wolverhampton are also not in good shape. With four losses in the last five rounds, the Wolves have drastically reduced their chances of participating in European tournaments next season. After visiting Stamford Bridge, Wolverhampton will also face Liverpool and Manchester City. In this situation, the probability of the “Wolves” to overtake West Ham in seventh place does not seem very high.

In general, Wolverhampton in this form looks more like an exhausted team. Bruno Lage will have to make a lot of changes in the lineup in the summer to fight for a higher ranking. For most of the season, the Wolves have struggled a lot in attacking terms and even have indicators in this regard of a team from the bottom of the standings. The Wolves have not even scored in 47% of their matches so far. In fact, mostly good defensive play secured a place in the top half of the table for Wolverhampton.

Unless the Blues make a defensive error again, I don’t see Wolverhampton scoring at Stamford Bridge. Throughout the season, Chelsea had problems at home, winning only half of them, but still can not rest assured about his position in the Top 4 and must chase the three points. However, the form of the Londoners in attack does not give prerequisites for a successful match. Chelsea’s previous three victories in front of their fans ended with less than 2.5 goals scored in the match.