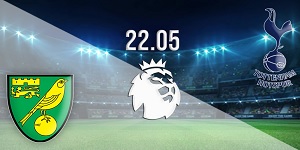 Carrow Road will host the last round of the Premier League between Norwich and Tottenham. The meeting on Sunday at 18:00 will be the last for the “canaries” in the elite of England. They have not beaten their current rival in the championship since 2014. With four losses in their last five games with the “spurs” in the Premier League, they can hardly expect a proper sending.

Norwich turned out to be the first elite team in England to play in the Championship next campaign. The “Canaries” have achieved only five successes in their 37 games so far, with which they collected an asset of only 22 points. They lost 25 of their matches and conceded 79 goals in their own goal. These statistics are really scary for the team that has just returned to the Premier League.

However, in his last stay in the elite of England, Norwich recorded similar statistics and finished with 21 points. Then Manchester City was his opponent in the last round and defeated him 5-0. Now there is a tough opponent again, for whom the match is extremely important.

Tottenham managed to fight tooth and nail for the fourth position in the Premier League and will hardly allow it to be taken away from him. It was the direct match between him and his city rival Arsenal that tipped the scales in favor of the Spurs. They prevailed at their stadium with 3: 0 in the middle of the month, but that was not enough.

However, the loss of Arsenal to Newcastle round after that, allowed Tottenham to overtake him. The Spurs are already in control, and given their rival, their task seems even easier.

Norwich has long since come to terms with the fact that he will leave the elite of England. Tottenham, on the other hand, still have something to fight for. In my opinion, the guests will try to solve the match as soon as possible, but they will not stop looking for goals. Only the three teams ahead of them in the standings have scored more goals from Tottenham’s attack led by Harry Kane and Hyun-Min Son.