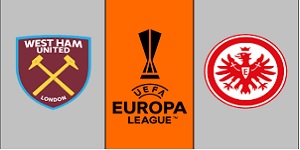 West Ham – Eintracht Frankfurt is hardly the most anticipated semifinal pair in the Europa League. I predicted that these two teams would be eliminated in the round of 16, but this did not happen in the quarterfinals. One of these two teams will compete for the trophy on May 18 at the stadium in Seville, Spain. The winner of the pair RB Leipzig – Rangers will be waiting for them there.

Both teams won their groups in the fall, which took them directly to the round of 16 in the race. West Ham eliminated Sevilla after defeat in Spain, but success and overtime in England. Eintracht beat Betis in Spain, and a draw in Germany was enough to achieve the ultimate goal.

West Ham have recorded a horrific first quarter-final with Lyon, in which they should be pleased not to lose, even taking the lead. The Hammers played with one man less in the second half, but Lyon was the better team on the pitch throughout the match. And after such a match in England, everyone expected the “Kids” to win at home. They were again the more active team on the field, but this was dictated by the liabilities with 0:2 at the break. In the end, West Ham won 3:0 and moved on.

Eintracht Frankfurt faced the favorite for the trophy in the Europa League Barcelona and presented the sensation. The match in Frankfurt ended 1: 1, with the Eagles having the most positions in the match and they can regret the missed prestigious success. However, this was reached at the “Camp Nou” in front of 30,000 supporters. Eintracht took the lead with 3: 0, and Barcelona managed to return two goals, but they turned out to be insufficient.

On Sunday, West Ham lost the derby with Chelsea with a goal at the end, which was another poor result for the team. The Hammers are now far from the Top 4, battling Manchester United for sixth place in the standings. Eintracht also failed to win their match of the championship, which is something normal for the team lately. The Eagles finished 2-2 with Hoffenheim at home and remain ninth in the standings.

I’m expecting two exciting matches and I don’t think anyone can be sure which of the two teams will go ahead, even with a two-goal lead before the rematch. The overall form of the opponents is very weak. The success over Barcelona is the only one for Eintracht in the last nine games of the team. The one over Lyon for West Ham is the only one for five matches. The dry nets for both teams have been almost non-existent lately and I don’t expect to see them today. In my opinion, West Ham will take advantage of the home factor, but in the spring the Europa League matches are the most important for Eintracht and the team is fully focused on them.