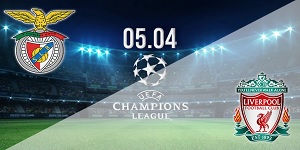 There are two more surprising names in the quarterfinals of this year’s Champions League. One of them is Benfica, which today will be the first to host Liverpool. Of course, the favorite in this clash is known to everyone, but in this phase of the tournament hardly any team has the right to underestimate their opponent.

In the round of 16 Benfica was again an outsider against Ajax, but managed to cope with the difficult task. The Eagles equalized twice at home to start everything from the beginning of the rematch. It was dominated by Ajax, which, however, with only two accurate shots and failed to sign. A single one was enough for the Portuguese to have minimal success with 1:0.

In theory, Liverpool’s opponent in the quarterfinals is heavier than in the quarterfinals. The Merseysiders then played Inter, who inflicted the only loss on Klopp’s boys in 16 games. She was admitted to the rematch at Anfield with a minimum of 0:1, but this did not prove fatal. The reason is that Liverpool first won 2:0 in Milan with two quick goals in the final 15 minutes of an equal clash.

Benfica come out on the field today with a loss in their last match. The Eagles lost 2:3 to Braga in the championship, but there the third position for the team has long been resolved. Liverpool not only continues with the victories in England, but also kept the fifth consecutive dry net in the Premier League. This happened at home with a 2:0 victory over Watford.

There are many European matches between the two teams, as Benfica even had a period of four consecutive victories over their opponent. However, the last success was in favor of Liverpool with 4:1 in the quarter-finals of the return match in the Europa League in 2010. Today, bookmakers expect nothing but victory for the guests, and I fully support them.

Benfica is a strong team that as a host in Europe is able to present surprises, such as the 3:0 victory over Barcelona in the fall. However, Liverpool arrives in Lisbon in a series of great results and a very strong performance. In the group stage, the Merseysiders defeated Porto 5:1 on home soil, and the other three visits to the tournament were also won. Lately we have seen very stable performances of the English team in defense and fragile victories with a goal or two difference, so today I will bet on the same.